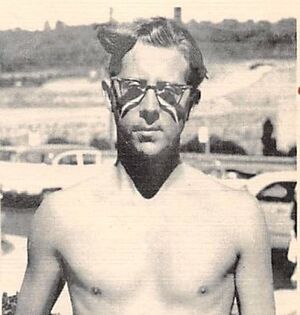 Born in New Zealand, Raeburn was better known as a member of Canadian fandom in the 50s, editing the fanzines A Bas and later Le Moindre. He was one of the leaders of the Derelict Insurgents, who revitalized the Toronto Science Fiction Society in the early 50s.

He was nominated for the 1956 Best Fanzine Hugo for A-Bas.

His first fanzine, À Bas was a publication of the Derelict Insurgents, but after the first issue, it was his alone. Also in 1954 Raeburn published a one shot What Things Come Out in the Spring, subtitled "Thot on Canadian Capers". It was of a critique of some of the articles in the fanzine Canadian Capers. He was a member of The Cult. He published the FAPAzines Le Moindre, More Stuff for FAPA and The Yngwie J. Malmsteed Story.

Later in the 50s he was well known in fandom as one of the Balcony Insurgents of NYCon II, who occupied a balcony rather than pay to hear the banquet speeches. He was also known for the employment of "Bop-talk" (jazz-associated lingo or slang) in his writings, which gained him the reputation of being "ultra cool".

Raeburn was a TAFF candidate in 1957. From 1955 through his death, he was a member of FAPA and of the FATE Tape. Raeburn has been credited with coining the term "sercon." He was made a Knight of St. Fantony in 1957.