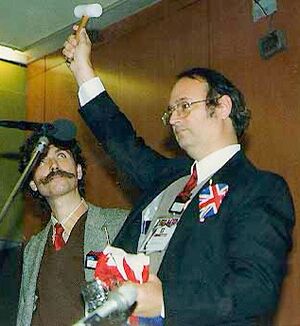 Nolacon II Chair John Guidry, right, raises the gavel passed on to him at Conspiracy '87, as Vice Chair Justin Winston looks on. Photo by Carol Porter.

Bidders: Bermuda Triangle Bid, New Orleans in '88, Cincinnati in '88, and St. Louis in '88. Yugoslavia in '88 withdrew about 1985 and did not file, Sydney Cove in '88 at least got a few (writein?) votes. See 1988 Worldcon Site Selection. See also Mike Sinclair, who organised memorable bid parties throughout the early 1980es but stayed away from actual conrunning after he helped Nolacon win.

Nolacon II was the last Worldcon selected with a two-year lead time (until this was reversed back starting with the 2008 Denvention 3, selected in 2006). At the 1986 ConFederation where it was selected, the 1989 Worldcon (Noreascon 3) was also selected.

Nolacon 2 was famously poorly organized, being “saved” by a big influx of carpetbagger fans at the last minute. Whether they made things better or worse is disputed. (See #Convention Reports, below, for many details.)

Nolacon chose to give a Special Committee Award to the SF Oral History Association. More than 30 years after the convention, Betsy Wollheim, GoH Don Wollheim's daughter, recounted how the committee had told her father that they were going to give the award to him, but later changed their minds.