A term that arose out of 1970s Star Trek fanfic, a Mary Sue is a generic name for the type of unrealistic fictional stock character who is so competent or perfect that she’s absurd — excelling at tasks that should not be possible.

The name comes from a character created by Michigan/Canadian fan Paula Smith in her 1973 parody story “[http:/www.fortunecity.com/rivendell/dark/1000/marysue.htm A Trekkie's Tale]," published in her fanzine Menagerie #2. The story starred Lt. Mary Sue ("the youngest Lieutenant in the fleet — only fifteen and a half years old").

At first applied only to bad fanfic, the term came into common use in media fandom and has since spread into sf and mundane literary criticism. 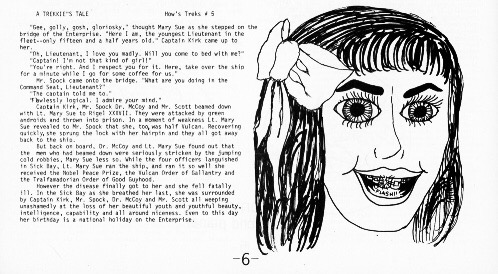