Mary Kay Kare (née Jackson) was a Bay Area conrunning fan who co-chaired Potlatch 19 in 2010 and who worked on a large number of regionals and Worldcons, including running the Hugos for Denvention 3 in 2008. She was a member of the Mythopoeic Society and had been on its Council of Stewards.

She grew up in Oklahoma and was a member of the Norman Oklahoma SF Society in the late 1970s. She later lived in Ohio and Seattle before moving to the Bay Area.

Her fanzines include Red Dust. She was a member of a number of APAs: Slanapa, DI Apa, Butterbur's Woodshed, APA-pi, and Myriad. She was very active online in the '90s and '00s. 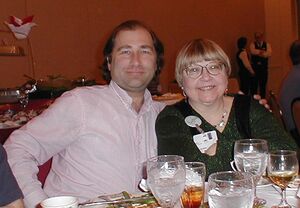 She ran in the 2007 TAFF Race, but it was called off when the target Eastercon, Convoy, was canceled.

She was married to fellow fan Jordin Kare. They were Tuckerized in Spider Robinson’s Callahan’s Touch. Before her retirement, she was a catalog librarian. She died of a blood infection in 2021.