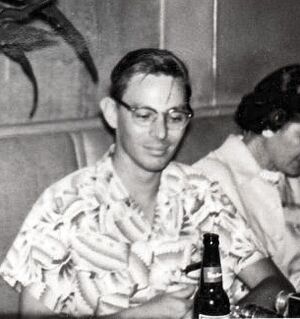 Kenneth H. Bonnell, an LA fan active beginning in the 1940s, belonged to LASFS and the N3F. He lived in Tendril Towers.

Bonnell participated in a one-shot with Jack Speer, Dale Rostomily and Sandy Kadet that ran in the 37th FAPA mailing. In 1946, while a private in the Army, he pubbed the first issue of his fanzine, ForLo Kon, also distributed via FAPA.

In 1949, he sold a story, “Strange Quest,” to the forthcoming Canadian prozine Amazing Adventures, his agent, Forry Ackerman, reported to Fantasy-News 191 (June 19, 1949), but we can find no evidence either the story or the magazine was ever published.

Bonnell was allergic to cats, which caused him trouble at fan gatherings.

He attended Solacon, the 1958 Worldcon.