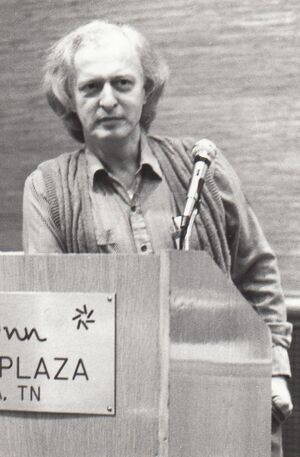 Jerry Page at the Mimosa Live event at Chattacon 13 in 1984. Credit Rich Lynch.

A fan and pro who was born in Chattanooga and began collecting SF in the early 50s. He discovered fandom in 1954 when he joined the Atlanta Science Fiction Organization where he met Jerry Burge and Hank Reinhardt with whom he remained friends. He was a member of the SFG and published Blazing Armadillo Stories, Pulp Countdown for PEAPS.

In 1963 his first pro story appeared in the March issue of ASF. In 1969 he became a professional editor in working for TV Guide. He subsequently edited Witchcraft and Sorcery magazine (formerly Coven 13), the Arkham House anthology Nameless Places, and for DAW, four volumes of The Year's Best Horror Stories and Heroic Fantasy, (co-edited with Hank Reinhardt).

He continues to write, much of his fiction appearing these days on Shelby Vick's website. He is also a well-known collector of pulp magazines, and an active writer of so-called "neo-pulp" fiction. He is believed to have been the first such with the creation of The Armadillo, a character that is a take-off of such pulp characters as The Shadow, in 1956.