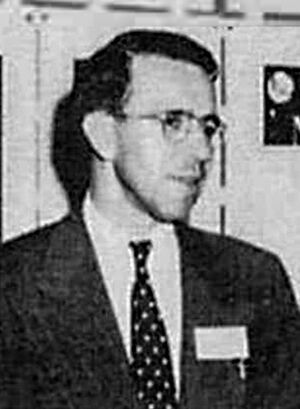 Lloyd Eshbach, an influential early fan, also had a minor pro career. He was a reader of SF right from the start of Amazing Stories in 1926 and began corresponding with other fans shortly after addresses started being published in the prozines, thus making him one of the very earliest fen. As early as 1930, he was a member of the Golden Gate Scientific Association. He attended Midwestcon 1, Philcon 1, and the first Worldcon. He lived in the greater Philadelphia area all his life and was active in First Fandom.

Over My Shoulder: Reflections on a Science Fiction Era (Oswald Train: 1983) is his semi-auto-biographical history of small press publishing in the 1930s through the ’50s. It is in there where he recalled L. Ron Hubbard as telling him in 1949, "I'd like to start a religion. That's where the money is.”

He began publishing professionally with the story, "The Man with the Silver Disc" (Scientific Detective Monthly, February 1930). In 1946, he started up Fantasy Press, one of the pioneering sf small presses, publishing works by Jack Williamson, L. Sprague de Camp, Stanley Weinbaum, and others in hardcover. He edited Of Worlds Beyond: The Science of Science Fiction Writing (Fantasy Press, 1947), the first book-length work on SF writing from the point of view of professionals. He also published critical works about the history of modern science fiction. In the 1980s, he returned to writing, publishing several novels.

For the Noreascon Three Program Book, he wrote a number of reminiscences of Worldcons he had attended: