Eleanor Daugherty (née O’Brien) was a Los Angeles fan, a member of LASFS, active in the early 1940s. She attended Chicon, the 1940 Worldcon, and was much mentioned in con reports about Denvention the following year.

She was credited as co-editor in the third issue of Shangri-LA in July 1941, although that may have been by way of a wedding announcement. Her marriage to Walt Daugherty did not last long; he married another LASFan, Virginia “Jimmy” Laney, in 1945.

In Shangri-LA 1 (April 1940), T. Bruce Yerke reported that Walt had recruited both Eleanor and Jimmy into LASFS, and that they were working together on an entertainment committee. Jimmy wrote more about Eleanor’s role as head of the committee later in the issue.

Eleanor apparently gafiated after her divorce. She married Frank Baker in 1947 and they eventually settled in Chula Vista, CA. In 1981, Denvention Two reported Eleanor alive and well in L.A. in its census of 1941 Worldcon members. She died in 2005. 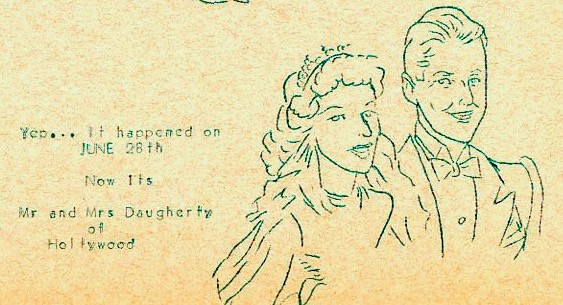