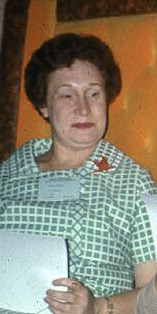 Edith Ogutsch, a German-born LA poet and author, contributed to a variety of fanzines including Riverside Quarterly, Diversifier, Fantasy Macabre and Starlanes. She was a member of LASFS.

She worked as a secretary for Sam Moskowitz at the trade magazine Quick Frozen Foods. As a child in 1939, Edith was sent out of Germany by Kindertransport to escape the Nazis. Her parents were imprisoned in the Theresienstadt concentration camp, where her father died. She was reunited with her mother in 1947 when they immigrated to the United States.