For Memorial Day weekend, 1997, Disclave moved back to the hotel-of-many-names, the New Carrollton Sheraton in New Carrolton, MD. The Author GoH was Patricia Anthony, the Artist GoH was Lissanne Lake, and the Fan GoH was Peggy Rae Pavlat. It was chaired by Michael Nelson.

The con was beset by a combination of bad judgment and bad luck, resulting in the Disclave Flood (Disclave 41 is often referred to as "Dripclave") which ended the convention series.

Shortly after 5 a.m. Sunday morning, guests in a fourth floor room, in the course of activities of dubious decency -- the concom had allowed a bondage group to share the con’s space -- broke the ceiling fire sprinkler. It seems it had not occurred to them that a sprinkler head did not make a good place to attach restraints to. Water gushed forth, alarms sounded, and a flood poured across the floor and down the elevator shafts. Many guest rooms, the hotel lobby, the general manager's office, and the con's Green Room were soaked. 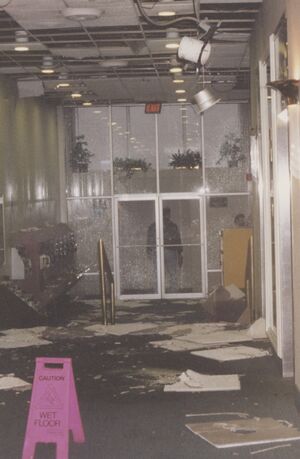 Disclave hotel lobby after the flood. The flood began in a 4th floor room beside the elevator. Photo by Laurie Mann

As reported in the WSFA Journal, June 1997, "The convention and hotel staffs responded well to the emergency. Disclave encouraged fans who were rousted from their beds to head to the DisCave, Disclave's con suite, which was quickly replenished with additional refreshments. Disclave also reopened the film room and began showing videos. The hotel brought in additional staff to clean up the mess and provided complimentary breakfast pastries, coffee and drinks in the lobby for guests who were inconvenienced by the flood." John Pomeranz, the president of WSFA that year, very ably led the mitigation effort.

With some changes of location, convention activities continued for the day. There were no injuries and only minor damage to personal property. The hotel ascertained that the --idiot-- person responsible for the incident was not a Disclave member, and it did not attempt to hold the convention financially liable for losses. Within a few hours, the first commemorative songs, buttons and t-shirts started to appear.

So far, it was stupidity. Now came the bad luck: That evening torrential thunderstorms swept through Washington and around 3 inches of rain fell at the hotel in a relatively brief period. The roof backed up and water leaked into the top floor rooms, and the floor of the sunken exhibit hall ("the bunker") holding the huckster room was filled with up to several inches of water as the committee and volunteers raced to move books and other stock off the floors. (The hotel did not blame the convention for the thunderstorm, but it undoubtedly added to the stress everyone felt.)

The long-term effects were more serious. Disclave 42, booked at a different hotel, was canceled just a few weeks before it was scheduled to begin. According to reliable rumor, the hotel abruptly demanded a huge security deposit after hearing distorted reports about the Flood. After that, WSFA discontinued Disclave. In 2001, it began running a new convention, Capclave.

While this sign may have existed before Disclave 41, afterwards we started seeing it in almost every hotel room in America: 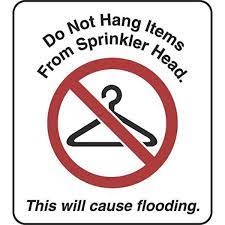