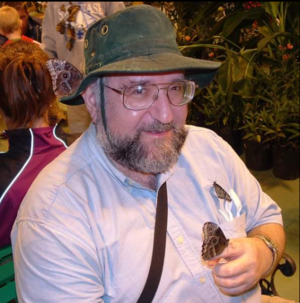 David E [no period] Romm (sometimes styled DavE and Baron Dave Romm) was a Minneapolis fan who was involved in regionals, (especially) Minicon and Worldcons, particularly in the 1970s through the ’90s. Originally from New York State, he was President of the Albany State Science Fiction Society, 1974–78, and was later quite active in Minn-Stf. He was one of the residents of the Bozo Bus Building.

He was officially a baron of the micronation of Ladonia.

He was the producer of Shockwave, a science fiction/science fact radio program on KFAI, 1979–2017. He was a member of (and probably OE of) RAPS.

He organized the cancelled Murphycon.

He was an accomplished photographer.