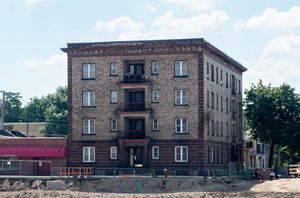 A small apartment building at 343 19th St. E in Minneapolis that became a slan shack when a bunch of fans moved in and lived there from 1973 through 1981 (when the building was reorganized as condominiums). For several years there was a Minn-Stf party there every Saturday night.

It was Scott Imes' mission to get all the apartments in the building occupied by fans. There were several generations of fannish caretakers (I believe including Scott Imes, Don Blyly, and Dave Wixon, though I am not certain of what order; and there may have been others), and they all operated by one of the same rules: when an apartment became available, spread the word around fandom quickly. Thus the fannish occupancy of the building increased quite rapidly for a while. One resident doesn't remember more than a single non-fannish apartment remaining, though others think that's higher than it reached.

Being caretaker was an arduous job. The ancient steam boiler heating system supported both coal and gas as fuels. The gas supply was bought cheap on an "interruptable" basis, so it might be cut off, usually in the coldest weather. The coal system did have an auto-feed, but it was unreliable, so the caretaker often lost a lot of sleep keeping it running on the coldest winter nights. 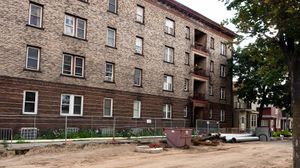 The gas furnace also nearly caused a disaster (with the help of the owner, who thought he knew how to fix it himself). Whatever he may have known earlier in life, that particular time he left the commercial gas main wide open, and enough gas came up that Scott noticed the smell outdoors on the back balcony--on the third floor. He went down and got it turned off (which may have been unwise; calling for emergency assistance is the recommended course) and got the landlord away from there, and got the building aired out before anybody lit a cigarette or whatever. It seems possible that, with the volume in which gas was clearly smelled, the (smaller) volume that would have been near enough to an explosive mixture might have been big enough to create a crater where the building was.

The building sits on a corner, and has two entrances and two addresses. Despite appearing to be one building, the two entrances don't connect inside, except in the basement. The back balconies also connect. Fans seemed to consider the 343 E. 19th St. side the "main" building; the other side was 1902 4th Ave. S.

4th Ave. S is adjacent to I35W. Even with the noise walls in place (and they were not yet there at the start of the Bozo Bus period), the upper floors of the building can be seen from the freeway. When Minicon was being held downtown (which was during most of the Bozo Bus period) fans living in the building would put illuminated bozo faces in their windows facing the freeway, so that fans coming up the freeway to the convention would see them.

The first location of Don Blyly's Uncle Hugo's was at 4th Ave. and Franklin, the other end of the block from the Bozo Bus Building.

"Bozo Bus" was a reference to Firesign Theatre's comedy album I Think We're All Bozos on This Bus.

("I" seem to have left an "I" or two above, so--they're from a fairly major update by me, David Dyer-Bennet, resulting from local and Facebook discussions after I shot and posted some photos including the two I added to this article. Garth Danielson, David Cummer, Michael Butler, Phaun Bonewits, Martin Schafer, and no doubt yet others I'm forgetting contributed information to these discussions, though any mistakes I published here remain my own fault.)