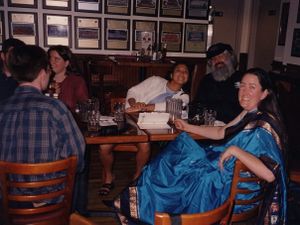 Brotherhood without Banners founders at their first dinner in 2001.

The Brotherhood Without Banners is a George R. R. Martin / A Song of Ice and Fire / Game of Thrones club.

The Brotherhood Without Banners ("BWB") fanclub began at the 59th Worldcon (The Millennium Philcon) in Philadelphia, PA, in 2001. The first formal BWB event was a dinner at a nearby restaurant on August 30, 2001. George R. R. Martin ("GRRM") and most founding members attended the dinner. 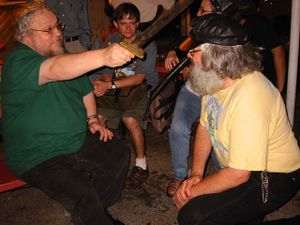 GRRM at left in the green shirt wielding the sword and Kenneth D. Brown at right in the yellow shirt.