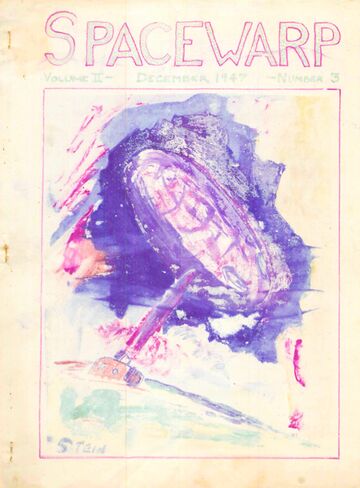 A fanartist, he was famed for hekto “Steinpix” in which “Bob merrily adopted the technique of splashing the ink on with a brush rather than the conventional pen. These rainbowish concoctions went well with the multicolored balance of Spacewarp and were a distinguishing feature of the magazine for many issues,” according to Redd Boggs.

He attended Philcon, the 1947 Worldcon, and bid unsuccessfully for Milwaukee in 1948. He belonged to the N3F and FAPA.

Over Labor Day weekend, 1948, Bob ran Beercon at his house in Milwaukee. It was attended by a number of Michifen and chronicled by Hal Shapiro in Spacewarp 19 (October 1948).