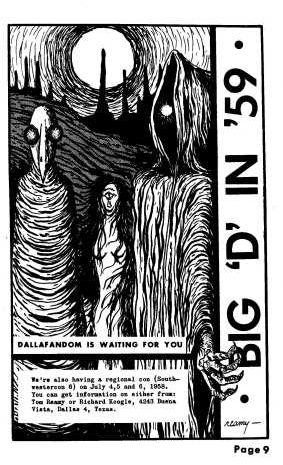 The Big 'D' in '59 bid was organized by Dale Hart, Tom Reamy, and probably Richard Koogle. They advertised in the Solacon PR 2 which was published in early 1958 but apparently did not file and thus was not voted on during site selection at Solacon.

It seems likely that the failure of the bid was in some way associated with the collapse of the Dallas Futurian Society in July, 1958 -- though which caused which is unclear.

In any event, Detroit in '59 was selected. See 1959 Worldcon Site Selection.