Belle Wyman (née Cridland) was likely the first fan brought into the microcosm by a grandchild. Forry Ackerman’s maternal grandmother, she attended LASFL/LASFS events in the 1930s and ’40s, as well as locced fanzines. (Unless, of course, Forry wrote them in her name.)

Laniac for August 4, 1945, reported that Belle was present at a banquet Forry and E. E. Evans threw for the visiting Tigrina. Of course, since 4E had in June publicly proposed marriage to Tigrina in a letter in Walt Dunkelberger’s Fanews 166 (June 19, 1945), Belle might simply have wanted to get a look at her. An aunt and uncle of Forry’s were there, too. (In #170, on July 3, Tigrina declined.)

She was married to architect George H. Wyman, who designed L.A.’s famed Bradbury building, reportedly much influenced by a futuristic structure described in Edward Bellamy’s science fiction novel and social commentary, Looking Backward: From 2000–1887. The Wymans were serious Spiritualists. 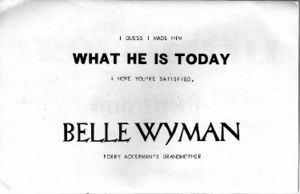