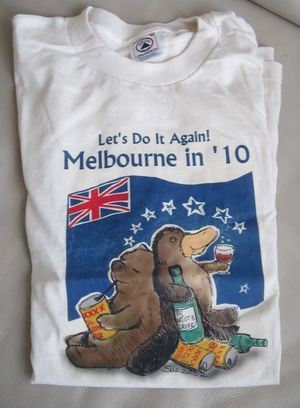 A bid to bring the Worldcon to Melbourne, VIC in 2010 which won, resulting in Aussiecon 4. It was sponsored by Victorian Science Fiction Conventions Inc.. It was very briefly known as "Melbourne in 2010".

The bid started one evening at a party at L.A.Con III where Stephen Boucher, upon being asked if he'd consider running a NASFiC in Melbourne, said "Hell, no! I'd rather run a Worldcon". This quickly got out of hand...

The f/a/t/a/l/ early hours of the bid are recounted in the article How to Start a Worldcon Bid in 24 Hours or Less from the Aussiecon 4 website.

An early piece of artwork by Sue Mason for the bid said "old firends" (in capital letters). Accordingly, an official membership category of firend was created.

The bid was unopposed.