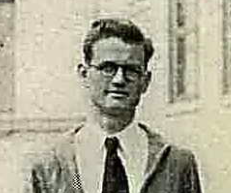 Aubrey MacDermott was a very early fan in the Bay Area. He attended the first Staplecon.

He claims to have founded the Eastbay Club in 1928, making it arguably the earliest SF club, but his memory of when it was founded seemed to move further back in time as needed for it to remain first, so his claim is not widely accepted. See First Club for discussion. His memoir on the subject is "Aubrey MacDermott on the Origins of Fandom." Regardless of which club actually came first, McDermott was definitely one of the very earliest fans.

He was the author of the 1987 article "Recollections on the Origins of Science Fiction Fandom 1917 to 1948." He was active in the First Fandom club and organized group tours to the USSR in the 1980s.

He was known to be rather voluble.

Aubrey attended San Francisco State College. In 1936, he married Beatrice Gordino and they had three children. Aubrey died in 1996 and Beatrice died in 2009.