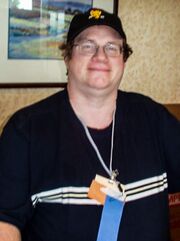 Alexander von Thorn (né David Koenig) is a longtime conrunning fan and traveling jiant from Toronto. He co-chaired ConComCon 16 in 2009 and chaired SFContario 1 and SFContario 2 in 2010–11, and has worked on many other conventions, Worldcons and bids, most recently the Buffalo in 2024 NASFiC bid.

He has been an officer of the Science Fiction and Fantasy Society of Upper Canada. His first SF convention was Ad Astra III in 1983.

Alex managed a game store, The Worldhouse, in Toronto from 1982–95, and works as a web developer. Alex is originally from Buffalo, NY. He adopted “Alexander von Thorn” as a penname in the early ’80s, and later changed his name legally.