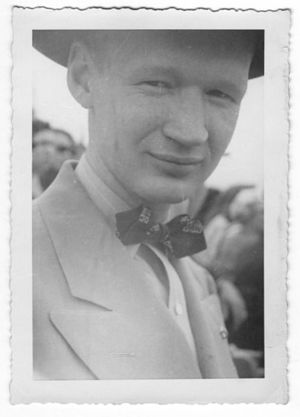 John Bristol Speer, aka Jack F. Speer and John A. Bristol, was one of the fathers of fandom and the first really important fanhistorian, writing Up to Now: A History of Science Fiction Fandom as well as the first Fancyclopedia in 1944. In 2004, he was Fan GoH at Noreascon 4 in Boston. 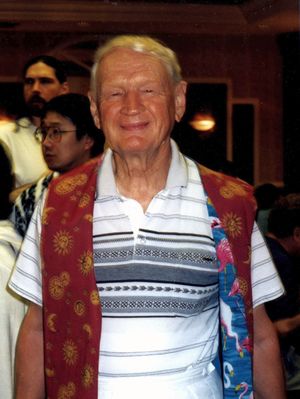 Originally from Oklahoma, where he started reading sf in 1928 at age 8. He found fandom through the lettercolumns of Wonder in the early 1930s, where he started a correspondence with Don Wollheim. He lived in DC during the War and later moved to the Pacific Northwest before retiring to Albuquerque.

By inventing the John Bristol persona, he perpetrated one of the earliest and most successful hoaxes in the history of fandom, going to the extent of pubbing Fancyclopedia 1 under that pseudonym, and using F as a fake middle initial to hide his real second name. He was also known by the nicknames Juffus, Gakspiro, the Hily Magnified Woggle-Bug and Fascist Spear.

He was a member of FAPA (and was a leading member of the Brain Trust) and served in many offices, including organizing a Blitzkrieg.

While in New Mexico, he was one of the founders of Bubonicon (though he protested the name, see Bubonicon 2), and was memorialized at Bubonicon 40.