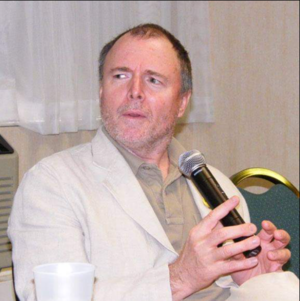 Will Shetterly, 2008, photo by Dave Romm

An American writer best known for his novel Dogland (1997).

Together with his wife Emma Bull, he created and edited the Liavek shared universe anthologies. In 1983 he founded SteelDragon Press with Emma Bull.

His novels Elsewhere (1991) and Neverwhere (1993) are both set in Terri Windling's Borderland shared universe. He has also written short stories for various Borderland anthologies.

Shetterly created the comic book character "Captain Confederacy," played a small role in the film Toxic Zombies, and ran for governor of Minnesota in 1994 on the Grassroots Party ticket. He placed third out of six candidates.

He was a member of the writing group The Scribblies, which included Emma Bull, Pamela Dean, Kara Dalkey, Nate Bucklin, Patricia Wrede, and Steven Brust.

In 2009, he donated his archive to the department of Rare Books and Special Collections at Northern Illinois University.