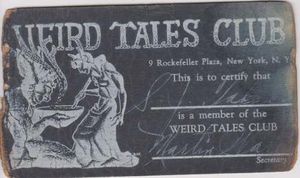 A club devoted to weird fiction, which probably operated in the late 1930s or early ’40s. We have the displayed membership card with an address of 9 Rockefeller Plaza, in NYC, (the location of Weird Tales).