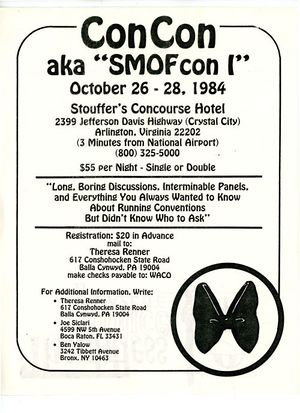 Smofcon 1 was held October 26-28, 1984 at the Stouffer's Concourse Hotel in Arlington, VA. It was chaired by Joe Siclari, Teresa Renner and Ben Yalow. It appears to have been officially sponsored by WACO.

This Smofcon began the tradition of doing an ice-breaker game of some sort on Friday night with "Fannish Trivial Pursuit".

A flyer for the con had a formal bowtie as a symbol (a reference to Ben Yalow's uniform's black watch patterned bowtie) with "aka SMOFcon" beneath it. For unclear reasons, the committee tried to call the convention "ConCon", but (as happened with Nycon II and the Tasfic), "the fans wouldn't have it" and it was called immediately and forever called "Smofcon".