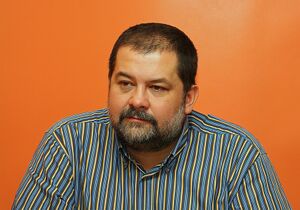 Sergey Lukianenko (Сергей Лукьяненко, also on book covers as Sergei Lukyanenko and Sergej Lukianenko) is a Russian fan and author of science fiction and fantasy, based in Moscow. He has been an active member of Russian fandom, attending conventions around the country.

Night Watch, which was made into a movie in Russia, is the best known of his works that have been translated into English.

He was born in Kazakhstan and educated as a psychiatrist. He is married to Sonya Lukianenko, and they have two children. Lukianenko has been strongly opinionated about Russian politics, promoting sharply anti-Ukraine views in his books and refusing to allow their translation into Ukrainian. He threatened authors who supported the Euromaidan movement that he would make every effort to prevent their books being published in Russia.

He has been openly supportive of Russia’s war on Ukraine, which prompted the WSFS Business Meeting at Chicon 8 in 2022 to pass a resolution calling for the Chengdu Worldcon to disinvite him as goh.