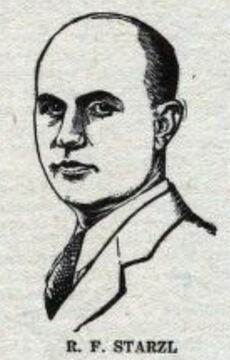 Roman Frederick Starzl was an early writer for the pulps. He was one of the executive directors of the Science Fiction League but joined the ISA.

A journalist, he wrote fiction as means of financing his family newspaper, the Le Mars Globe-Post of Le Mars, Iowa, and stopped as soon as he’d saved enough to buy into partnership.