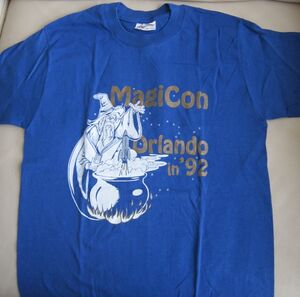 A bid to host the 1992 Worldcon in Orlando, FL. Somewhat unusually, they bid both under the name Orlando in '92 and also in the name, MagiCon, of the convention they hoped to hold. The bid was founded in 1986 by Becky Thompson and Tom Veal and they were shortly joined by Joe Siclari as co-chairmen. In ???, Tom Veal switched to vice-chairman.

The bid's theme was "Where Magic Meets Technology" and used wizards, genies, and space shuttles in its advertisements. Its bid schtick included the Magicon Potions -- tiny plastic bags with a white powder in them (those were more innocent days!) and a bit of advertising -- and the Magicon Bookmark Anthology, a series of bookmarks by well-known writers, each with a short-short story printed on it.

Orlando in '92's opposition was DC in 1992 which was forced to withdraw a few months before the vote. Orlando thus easily won the vote held at Noreascon 3. See 1992 Worldcon Site Selection.