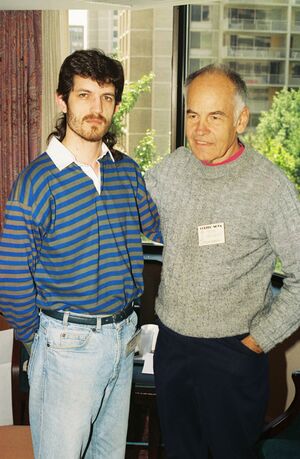 Nigel Rowe is a UK-born New Zealand-reared fanzine fan and conrunning fan living in Chicago. During the 1980s and ’90s, he volunteered on a variety of New Zealand Natcons and regionals in New Zealand (including chairing Norcon II in 1984, Orcon '85 and Norcon III (NZ) in 1986). He has been a member of the National Association of SF (NASF) National Committee, the Auckland University SF Society (AUSFS), Aotearapa, ANZAPA, fwa, and FWUK. He was OE for two issues of FHAPA.

He ran unsuccessfully for FFANZ in 1983 before winning in the 1985 race and attending the 1985 Worldcon Aussiecon Two in Melbourne. At the 78th Worldcon, CoNZealand, he was extensively involved in creating virtual displays celebrating the history of NZ fandom and these were created in a physical form for display during the "CoNZealand in-a-box" pop-up exhibit during Chicon 8 in 2022.

Nigel has worked extensively in science fiction and other specialty bookshops across three countries, including Heads n' Tales and Hugo's Books in Auckland, Unity Books in Wellington, Murder One in London and occasionally at The Stars Our Destination in Chicago. In addition, he founded the specialty SF small press Martian Way Press in 1983.

He ran Corflu 33 in Chicago in 2016 and has been a regular Corflu attendee since 1989. He acted as the official New Zealand agent for the 1987 British Worldcon, Conspiracy '87 — which attracted a record number of Kiwifans making the long-distance trip to Brighton (several of whom semi-permanently migrated to the UK in the aftermath, including himself).

He was married, for a time, to Karen Babich.