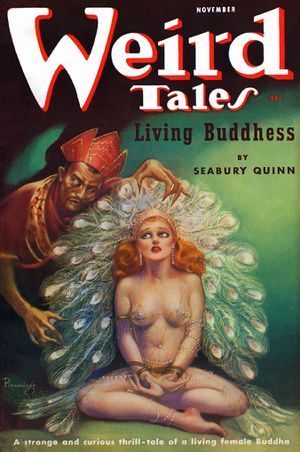 Margaret Brundage, born Margaret Hedda Johnson, was a Chicago-based illustrator and painter who is remembered mainly for her evocative, sensual covers for the pulp magazine Weird Tales.

Working in pastels on illustration board, she created most of the covers for Weird Tales between 1933 and 1938, and her work is considered to be classic and as deeply evocative of the era in weird fantasy as Frank R. Paul was of sf.

She was a judge for some of the entertainment at Chicon III.

She married leftist revolutionary Slim Brundage, whom she met at Chicago’s legendarily bohemian Dill Pickle Club, in 1927; they divorced in 1939.