Joe Green at Tropicon XII in 1994.
Photo by Mark Olson.

Joseph Lee Green is a longstanding member of Southern Fandom and a pro writer. In 1962, he pro-crashed with his first sf story, “The Engineer” in New Worlds. His stories, some of which were collaborations with his second wife, Patrice Milton (m. Dec. 24, 1975), appeared in the major prozines and numerous original anthologies

He is noted for throwing open his home to fen making the trek to Cape Kennedy to watch the launch of several of the Apollo missions.

Green is retired from his day job at NASA, with 37 years in the American military and civilian space programs. 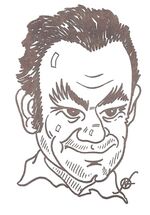