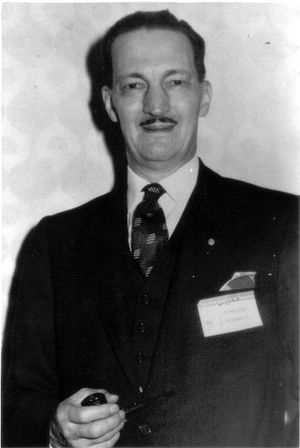 H. Beam Piper lived in central Pennsylvania in Altoona. He had been employed as a railroad detective until the 1950s when he lost his job. Starting in the early ’50s, he began writing SF for Astounding, becoming one of the favorites both of editor John W. Campbell and of readers.

By the early ’60s, he was popular and his books were selling (though he was still living in hand-to-mouth poverty.) He did not realize that he was on the edge of becoming a reasonably successful writer and, when his agent failed to forward some of his ASF earnings, he committed suicide. Around 2010, a group of fans paid for a proper tombstone in the Altoona cemetery.

Paracon, a convention held near Altoona in State College, PA, was named after his Paratime stories which had a strong association with the region.

He was fascinated by Charles Fort, and some of his stories (e.g., "He Walked Around the Horses" about Benjamin Bathurst) were based on Fortean matters. He was an expert historian, and the history of war played a major role in his writing. Consequently, his works have been used as the basis of many games. Down Styphon was a wargame based directly on Piper's Lord Kalvan stories, while Traveller made heavy use of the world of his novel Space Viking for setting and background.