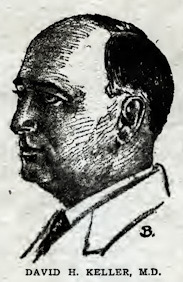 In 1929, Gernsback founded Science Wonder Stories and not only published Keller's work in the first issue, but listed him as Associate Science Editor. (It was this issue of Science Wonder Stories that Gernsback began promoting the term "science fiction" to the world.) The beginning of this magazine also began an intense writing period for Keller, but he was unable to support his family solely on a writer's income and set up a small private psychiatric practice out of his home in Stroudsburg, PA.

Original manuscripts by Keller were prizes for the first 10 fans who joined the Science Fiction League in 1934.