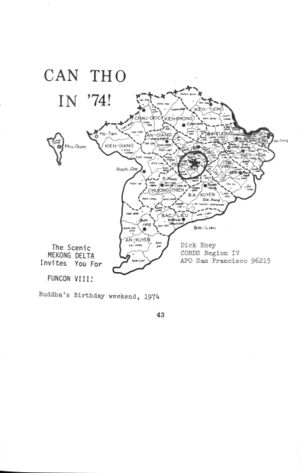 Can Tho in 74 bid ad from the FUNcon II PB

A hoax bid allegedly by Dick Eney to hold FUNcon 7 in Can Tho in Thailand on "Buddha's Birthday weekend" (generally celebrated in April through early June) in 1974.

It's a bit difficult to tell at this remove if this was a real hoax bid by Eney or a fake hoax bid by someone else -- Eney worked for a US aid agency in SE Asia during the Vietnam era and was accused by some fans of being a secret agent or some sort. There was a lot of low-level nastiness.

It's also unclear just what the hoax bid was hoaxily bidding for: Given the late Spring date, it wasn't Worldcon and probably wasn't Westercon. The ad appeared in the FUNcon II program book (1969) and holding FUNcon 7 in 1974 would fit.