From Fancyclopedia 3
(Redirected from A. L. Joquel)
Jump to navigation Jump to search

Arthur Louis “Art” Joquel II, a longtime LA fan nicknamed Alojo, published Sun Trails, Scorpio, and Fanfile in the 1940s. A member of LASFS, he guest edited several issues of Shangri L'Affaires from 1942–1946. During World War II, he started several chain letters, one of the ways fandom sustained itself in that period.

Occasionally, he published poetry under the pseudonym Fywert Kinge. He also published at least one story in the pulps under the pename William Graham. He dabbled in the occult. 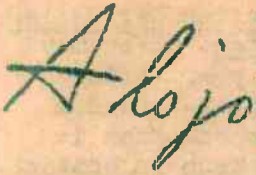