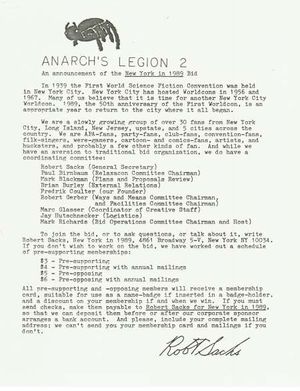 Originally, it was sponsored by Metro, but by late 1984, Burley informed File 770 that Metro had withdrawn its support.

It lost to Boston in '89 in a site selection election held at the 1986 Worldcon in Atlanta. In spite of being a serious bid, the New York in '89 bid failed to file their paperwork on time and consequently did not appear on the site selection ballot. See 1989 Worldcon Site Selection.

The election was notable for being the first held with a 3-year lead time under the revised rotation plan. The last 2-year lead time election (which selected Nolacon II to be the 1988 Worldcon) was held simultaneously.