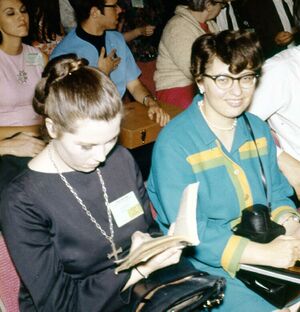 Dorothy Heydt (née Jones) was a California fan and author, active in fandom since the 1960s. A congoer and masquerader, Heydt began selling fiction professionally in the early ’80s, and used the penname Katherine Blake.

She was involved in early Star Trek fandom in the 1960s, the originator and first editor of the Star Trek Concordance, and she created the first detailed Vulcan language, in Spockanalia.

Heydt was later an active participant — a mainstay — in the Usenet newsgroups rec.arts.sf.written and rec.arts.sf.fandom, and in fandom in general, well known for her intelligent discussions up to her death. She codified the Eight Deadly Words in the early 1990s.

She belonged to the N3F. She was also a founding member of SCA.

Heydt was married to Hal Heydt for 51 years. She died of ALS.