Difference between revisions of "Derelicts" 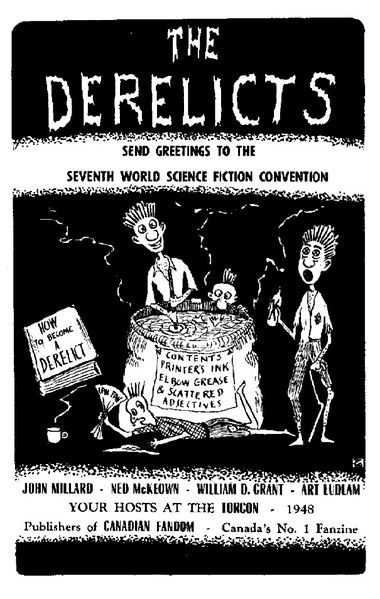 In the late 1940s, Ontario fandom was centered around the Toronto Science Fiction Society, which was founded in 1948, and the fanzine Canadian Fandom. Beak Taylor, John Millard, Bill Grant, Art Ludlam and Ned McKeown were prominent members. They put on Torcon.

Around 1953, a clique of insurgents, most notably Ned McKeown, Grant, Lyons, Raeburn and Steward, started calling themselves the Toronto Derelicts or the The Derelict Insurgents.

As typical insurgents, they indulged in light-hearted, non-serious behavior. Besides fanzines, the Insurgents were known for their liking of Beat poetry, jazz, leather jackets and fast cars. They were affiliated with the CSFA.