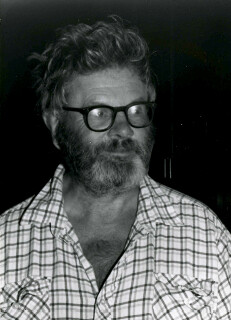 Brian Burgess; Photo by and copyright © Andrew I Porter

A British fan who was e member of OMPA, and won the 1987 Doc Weir Award.

He was renowned for bringing suitcases of long life milk and pork pies to conventions and selling them on to desperate fans at cost.

An early content provider for British fanzines, he was also long remembered for a failed convention prank at Supermancon) involving animal entrails and for his frequent participation in the Fancy Dress, as it was then called.

An extensive traveller, he was active in fandom for over 40 years. In 1995, he missed his first Novacon (the 25th) but was awarded the ‘Best Fan' Nova, which helped to make up for it.