(Did you mean Gary Blog? Or a weblog?) 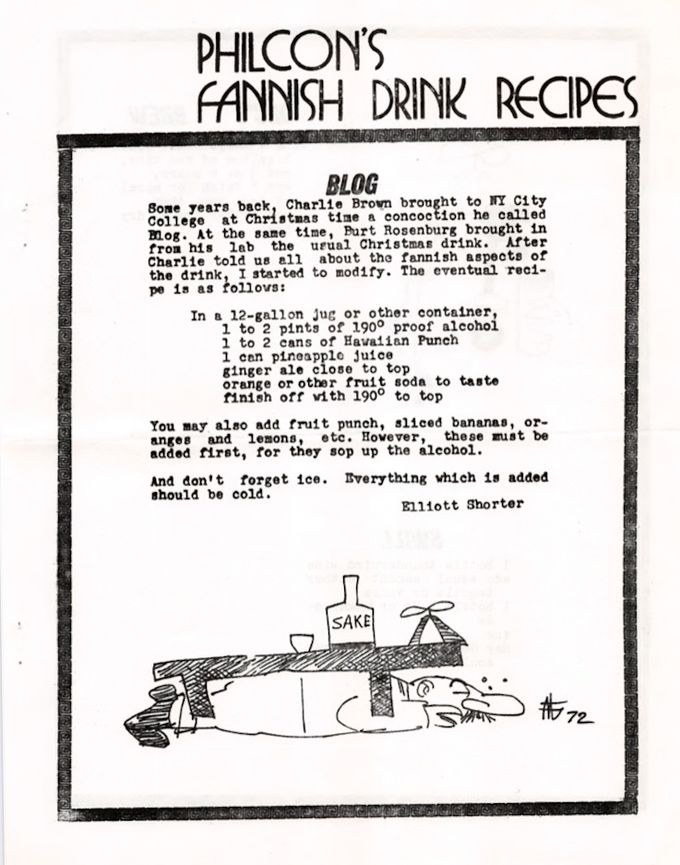 The best-known fannish libation, blog is a very strong alcoholic punch with many recipes. The term has been used for all manner of concoctions, potable or otherwise, that fans stir up at clubs and conventions.

Blog is said to be the only known cure for Twonk's Disease, but since it isn't clear which is the version that's efficacious, the poor Twonk's victims must keep drinking till the cure seems worse than the malady.

Most often today you will see the sweet, bright-red and rather mild mixture made by Minn-StFans since at least the 1970s. Legend has it that the recipe came from Jim Young's mother. It was served at the original Minneapolis in '73 bid parties, using a new (and thoroughly washed) plastic trash can as the punch bowl.

The canonical Minneapolis blog recipe calls for a 12-ounce can each of frozen orange juice, lemonade and limeade concentrates, 4 liters of ginger ale, a juice can of vodka, lots of ice and half a juice can of grenadine. Like all blogs, the Minneapolis version is somewhat variable, according to the ingredients available, but experts aver, "As long as you have enough grenadine, it doesn't matter."

Liverpool Group fans used the term blog first, in 1955; it was the fictional sponsor of their taped faan fiction play (aka tapera) "The March of Slime." Later, they hung up a "Drink Blog" sign at First Kettering and got the bartender to tell anyone who asked –- including a few mundanes -– that they were "out" and didn't expect the next shipment until the next day, but then the barman mixed cider and rum to sell as "blog."

Meanwhile, Peter Hamilton concocted a pale gray liquid with black specks in suspension, containing eggflip and brandy, with bits of Tia Maria, Beecham's Powder, aspirin, benedictine, Alka-Seltzer, black currant juice, a touch of mustard, and "other things"; fanhistory does not record whether any fen were desperate enough to drink it.

In the 1950s, a group of Detroit fans made blog for a Midwestcon room party. Buck Coulson recalled in Mimosa 13: