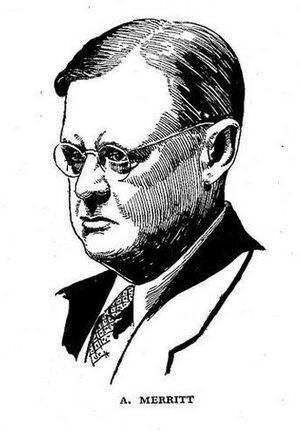 Abraham Grace Merritt, known by his byline of A. Merritt, was an editor, SF and fantasy author, and poet.

He was assistant editor of The American Weekly from 1912 to 1937 under Morrill Goddard, then its editor from 1937 until his death. As editor, he hired the unheralded new artists Virgil Finlay and Hannes Bok, who was a friend and collaborator.

A collection of his short fiction, The Fox Woman and Other Stories, was published in 1949. In 1985, Sam Moskowitz put together A. Merritt: Reflections in the Moon Pool (Oswald Train), a book collecting unpublished or uncollected stories, fragments, poems, articles and oddments, together with an account and critique of Merritt’s life and works.

The pulp prozine A. Merritt's Fantasy Magazine was named for him.

Merritt lived in Queens, New York City, with collections of weapons, carvings and primitive masks from his travels and a library of occult literature of over 5,000 volumes. He married twice, in the 1910s to Eleanore Ratcliffe, with whom he raised an adopted daughter, and in the 1930s to Eleanor H. Johnson.