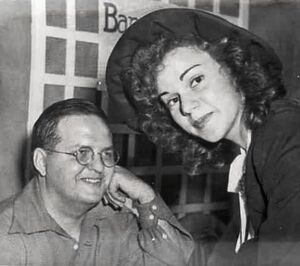 Thaddeus Maxim Eugene "TeD" Dikty was an early fan from Indiana who became general manager of a specialist bookselling business, and later was one of the founders of Shasta: Publishers. He married fellow fan and author Julian May in 1953.

He grew up in a household which read sf and started reading it himself at age 9. He was a member of First Fandom: He found fandom in October 1938 when he met Bob Formanek and started Fantasy Digest with him. In the late 1930s, he published The Grab Bag, and Who's Who in Fandom 1940. He was also a member of the SFL, IFF, and New Fandom.

He was on the committee of Chicon II, secretary-treasurer of Moonstruck Press, headed the Indiana Fantasy Association and published the IFA Review and Epilogue.

Other SF anthologies were Every Boy's Book of Outer Space Stories (1960) and Great Science Fiction About Mars (1966). In 1974, he started FAX Collector's Editions, a publishing enterprise aimed at reprinting, often in facsimile, from old magazines.