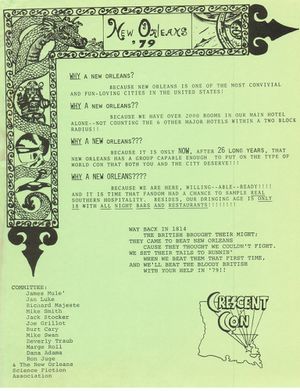 A bid to bring the 1979 Worldcon to New Orleans using the Marriott Hotel and the Rivergate Exposition Center as its venue.

The bid was set up by John Guidry, but later Guidry stepped down and allowed a group led by Don Walsh to take over. They selected Meade Frierson as titular chairman of the bid. Frierson eventually stepped down when Don Walsh failed to deliver on schedule. Jim Mule then became chair.

The opposition was Britain in '79 which won decisively at SunCon. See 1979 Worldcon Site Selection for details.