(Did you mean the New Zealand Natcons?)

Malcolm Edwards was chairman until about nine months before the convention when he resigned from the committee for personal reasons. To minimize possible bad publicity from this, he agreed to remain as titular chairman and presided at some at-con ceremonies. Paul Oldroyd took over all of his duties, but under the title of "Coordinator". Both Malcolm and Paul agree that Paul was the de facto chairman at the time of the convention.

The Metropole Hotel proved to be an unusually unpleasant venue, with the hotel's General Manager evidently having a personal dislike for the convention. Read the Hotel Manager Wall for some of the juicy details. At night, the hotel -- the main convention hotel, mind you -- was closed to non-guests, with room-key checking at the front door. Some people were climbing up to the balconies on the bar side to get into the hotel after hours.

Conspiracy was also marred by a heavy Scientology presence at the convention, and by Business Meeting chair Tim Stannard, who fuggheadedly thought it would be funny to conduct the BM in full WWII Nazi uniform. On the other hand, Los Alamos Fandom staged a very enjoyable fireworks display on the beach one night.

The Hugo nominating ballots were extremely late, with many fans not getting their ballot from the convention until after the deadline had passed. None-the-less, there were 1987 Hugos. Conspiracy '87 also conducted Worldcon site selection for 1990: See 1990 Worldcon Site Selection. 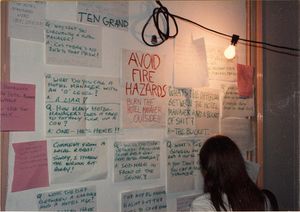 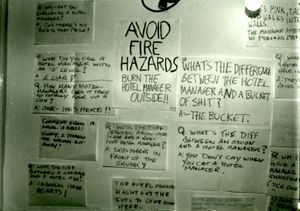