From Fancyclopedia 3
(Redirected from Brad W. Foster)
Jump to navigation Jump to search 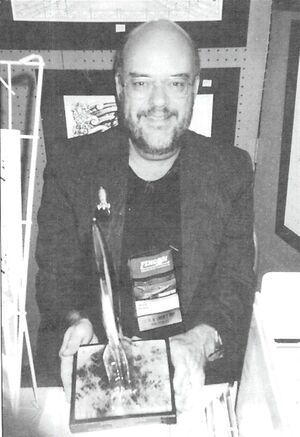 Brad W. Foster is a well-known Dallas-area fan, a widely-honored fanartist, and a lifelong Texan.

He was on the committee of Corflu 25 and edited the last issue of the Texas SF Inquirer.

In 1976, he founded the small press publishing company Jabberwocky Graphix, initially to print and distribute his own art and comics, although he has subsequently published the work of over 300 other artists from around the world. He was an illustrator for Amazing. He has been a regular contributor to Amazing Stories and Ansible. He published The Alphabeastiary and the fanzine Locs.

He is married to Cindy Foster. In 1977, he received a bachelor's degree in environmental design from Texas A&M University, then continued studying for two more years at the University of Texas at Austin, concentrating on techniques of fine and commercial art.