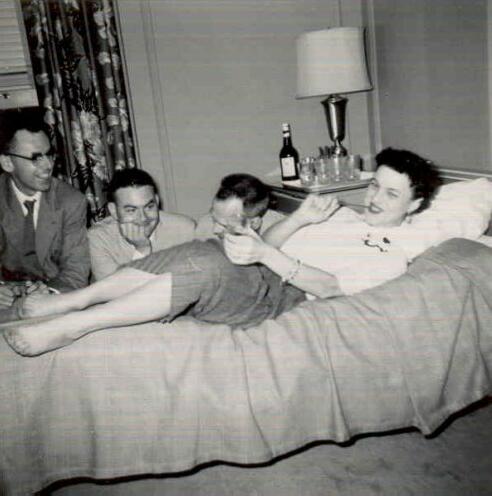 Phyllis Economou with, from left, Frank Robinson, Randy Garrett and Phil Farmer at Midwestcon 2 in 1951.

Phyllis Economou (who sometimes went by P. H. Economou or Phyllis Aitch Economou) was a Midwestern fan active in the 1940s through ’60s. Phyllis's home was well known as a social center for Milwaukee fandom, and she regularly sponsored Christmas parties and other such fan gatherings there.

She was a member of Wisconsin Fandom and attempted to create a Milwaukee in '59 Worldcon bid. She once described herself as being "most" of Milwaukee fandom. She attended such cons as Midwestcon and Worldcons.

She collected fanzines and her collection wound up donated to the Fanzine Foundation. She was married to fellow fan Arthur Economou.