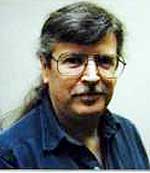 Larry had an interest in videography very early on, starting with reel-to-reel recording and U-matic recording in the early '70s, then Betamax. With Zita Kutkus, he began taping at his first convention, ConFusion 13 in Ann Arbor. He constantly endeavored to bring video technology into fandom, and it was always a disappointment to him that few other fans shared his enthusiasm for recording. He also ran a mundane video business, taping weddings, corporate events and such.

Although he continued to attend Stilyagi Air Corps meetings and ConFusion, Larry's fanac slowed in the 21st century as his finances and mental health worsened and was stopped entirely by a devastating stroke he suffered in 2011. He died under hospice care as a ward of the state on October 8, 2013. His death and its aftermath were sad, with a five-month struggle (IA) by Leah Zeldes Smith and others to keep him out of a pauper's grave.