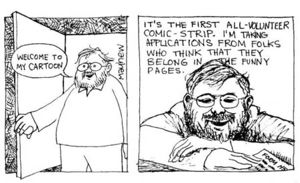 Joe was an active fan all of his life, a member of WSFA, award-winning fan artist. He chaired the 1987 Disclave and would have chaired the cancelled 1998 Disclave. In he won the 1998 Best Fan Artist Hugo, and was also nominated for Best Fan Artist in 1990, 1996, 1997, 1999, and 2000. His cartoons have appeared in Asimov's, Analog, Pirate Writings, and innumerable fanzines.

He worked for the Library of Congress and was its Recommending Officer for Science Fiction, deciding what sf books were worth preserving. He also wrote some professional sf with stories appearing in Tomorrow, Aberrations and Aboriginal SF and reviewed sf for the Washington Post, Absolute Magnitude, and TV's Fast Forward. He also wrote a number of sf radio plays which were performed at Disclaves and Boskones.