From Fancyclopedia 3
(Redirected from Evelyn C. Leeper)
Jump to navigation Jump to search 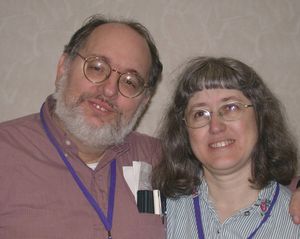 Evelyn Leeper is a fan now living in New Jersey who was a member and officer of the UMass Science Fiction Society from 1968 to 1972 and a member of the Wayne Third Foundation in Detroit in the mid-1970s. In 1978, she and her husband, Mark Leeper, founded the Mt Holz Science Fiction Club at Bell Labs.

She is one of the founders and judges of the Sidewise Award for Alternate History and a contributor to Uchronia: The Alternate History List. She is an inveterate writer of con reports and has been nominated for the Hugo Award for Best Fan Writer twelve times, losing on each occasion to David Langford.

She may have coined YMMV.