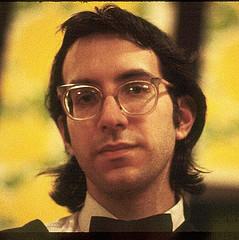 Ben Yalow, smof, has been involved in SF fandom for about 45 years, been to more than 800 cons, and worked on about a third of them. His first con was Lunacon 14 in 1971.

He has been a member of numerous Worldcon bids and has worked on many of them since the mid-1970s. He has often served as hotel liaison; he is known as keen negotiator of fan-favorable contracts.

Yalow is recognizable at cons for always wearing a black bow-tie, which sartorial accessory came to be a universal symbol of smoffery. He is a WSFS Business Meeting regular.

He coined the phrase "Wimpy Zone". One of his apothegms: “Running a Worldcon is impossible. Running a NASFiC is harder.” He was a member of the NY in '86 bid committee. He co-founded SMOFcon with Joe Siclari and Teresa Renner in 1984.

He has been a member of clubs in a number of cities, including Fanoclasts and Lunarians, (New York), NESFA (Boston), OSFCI (Portland, OR), FACT (Austin, TX), and SCIFI (Los Angeles). He is also a member of MCFI (Boston), which ran the Worldcon in 2004. He is a Fellow of NESFA.

He has edited four books (three still in print) for NESFA Press.

Yalow also studies military history. He is a retired computer programmer, having worked at the City University of New York for about 20 years. In 1970–71, at Columbia University, along with Steven M. Bellovin, Andrew Koenig and Aron Eisenpress, Ben co-authored the chess program CCCP. His mother was the Nobel Prize-winning medical physicist Rosalyn Yalow.